How delicious is irony? 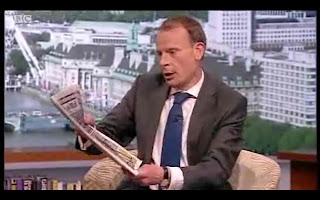 Andrew Marr has been a journalist for thirty years. Firstly with the Scotsman, then the Economist and the Independent, which he went on to edit for two years. He’s written for the Observer and the Express and has also become a familiar face on British television as the BBC’s political editor and the writer and presenter of fine BBC documentaries, that have also pulled in more income in book form.

Now I went to journalism school, got a degree in it in fact, and we had to write long-winded and often painfully dull essays on contempt of court, slander, libel, public interest and free speech.

It was perhaps the most distressing part of the whole three years, but we had to be taught, we needed to know, we couldn’t go out into the world of rat-like cunning that journalists inhabit without the knowledge of what we could and could not do.

Now, I’m sure Marr is a fine chap and he seems to have carried the sword and shield of truth and justice throughout his career higher and prouder than many who inhabit that slurry-pit of agenda-driving and misinformation. However, when I read that he was one of the people who had demanded, and received, a so-called ‘super-injuction’ from the high court lest we, the people who have been paying his salary very nicely for those thirty years, should discover the truth behind the jocular grin and the sticky out ears, I was a little perturbed.

Delving deeper did nothing to quell the uncomfortable feeling that Mr. Marr was having his cake and eating it too.

Having held him up to be a man of integrity and objectivity it did not sit well with me that one of the very journalist’s who has made a decent living (no mean feat) from journalism he must have harried and hassled the truth out of many a sticky corner. Always, no doubt quoting the inalienable right for the public to be told what is going on in the lives of those who have outstripped our meagre achievements. How we love to read or listen or watch as politicians, actors, sportspeople and the other celebrity Gods fall from grace as their unwise liaisons, sexual peccadilloes and nefarious dealings are spread out in front of us under the banner ‘public interest’.

Where do interest and mere titillation separate? I’m not sure any of us really know.
But surely the fact that Andrew Marr, respected voice, objective, fair, balanced, was giving us some of this information whilst having an extramarital affair, scrabbling to discover paternity issues over a small child and generally carrying on like a Tory backbencher from the Major years sits a little crooked.

Now I couldn’t care less if a politician or any other public figure gets off by dry-humping Louis Quinze furniture as long at it doesn’t affect the way they do their job. In fact for some artists to do their job they HAVE to do certain things the rest of us find distasteful or downright bizarre.
So what? Hump away!

What is harder to stomach is the idea that a journalist, who has made a life out of winkling the truth out of others, and presenting these truths to us for our delectation, might feel he deserves to be treated differently when he’s caught with his trousers down.

His admittance of embarrassment and uneasiness at gagging his own kind is something which only partially excuses his actions. I wonder if next time one of his sources tips him off to an unsavoury story concerning two families, a small child and questions of ‘who’s the Daddy?’ he might lay off.

Call me cynical but I went to journalism school; of course he wont. Saying one thing and doing another is the cornerstone of the hypocrite. Maybe he’ll move into politics, I’m sure he’d find the water warm and welcoming.

Reading: A Moveable Feast by Ernest Hemingway
Listening to: Give Me Convenience or Give Me Death by the Dead Kennedys
Posted by Sean at 11:22