Dark shadows in the East 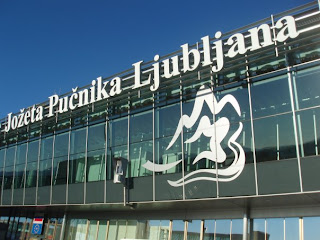 So another friend falls from the bachelor tree amidst the sound of creaking limbs and ‘one night only’ wildness. This time with a farewell to single-dom that took place in Slovenia. To be precise the rather wonderful and beautiful capital of Slovenia: Ljubljana.

Now I have never been anywhere without a guidebook since my childhood but there was something very relaxing about going somewhere and not feeling the need to know everything, go everywhere, see everything. It’s something I may take on board the next time I visit somewhere new with the future Mrs. L. It would be a most agreeable change for her I’m sure.

Banter, badinage and japes aside I was still struck by the wholesome nature of the city, small, pretty, sleepy, even the punks were apologetic. There was one thing that did shock though. Something which we have been putting to bed for at least a generation, but something that other parts of the world are unwilling to even contemplate. That is that we are all the same, regardless of colour, ethnicity, creed or sexuality (I’m including religion, you’re ALL crazy).

Seemingly the racist chants of crowds in Italy, Spain and other parts of Europe are not only for the fervent football fanatic. It runs deeper. I’ve heard casual racism in Thailand and other places but was shocked to be out in a modern European capital and have our guide (female, 21, travelled, decent education) happily declare ‘we don’t have black people here, we don’t like them, they are sleazy and disgusting.’ This was such a jolt, so out of leftfield, I wasn’t sure how to react. In fact I hadn’t given a reaction by the time she made her next statement.
‘Do you prefer asians or blacks?’
Still stunned I tried to point out that individual people can be awful or nice, trustworthy or vile, regardless of the colour of their skin. She talked over me by explaining that in Slovenia they don’t mind Asians as much as blacks because at least they work hard.

This wasn’t said for effect, it wasn’t said out of a youthful need to show off, it was so bald, so ingrained and so effortless. I didn’t know what to say.
Later as the poor Stag (now a poor married man) Will wandered the rather hip, cool ‘city within a city’, where graffiti is king and cheap green shots flow like brackish water, another shock.

‘you’re friend’ said one harmless looking pot-smoker as I said hello to his dog, ‘is he a faggot?’
Again I was stunned into silence, as my brain raced to come up with something, anything, that may answer this question.

Do eastern European homophobes honestly think that all gay men dress in a giant afro wig and polyester disco outfits? On the evidence of his question it seems they might.

(For the record Will is not gay, despite same sex boarding school)
So as we continue to shrug off the shackles of our recent Empirical past and deal with the fall-out and the repercussions and the guilt and try to find a place in our Country, and our heart, for the plethora of peoples and cultures that we so happily took from, before deigning to allow them to come here to do the jobs we couldn’t possibly do ourselves (help people, serve people, clean up after people) bear one thing in mind.

As for Slovenia, if you want to be in the EU and be included in our gang for protection and financial support, you may want to try and understand the irony of a small nation, trying to find it’s feet, being allowed to do that by the bigger boys and girls. Please join us in the present and leave your past behind.

Just read: The True History Of The Kelly Gang – Peter Carey
Listening to: Mellon Collie and the Infinite Sadness – Smashing Pumpkins
Posted by Sean at 10:55