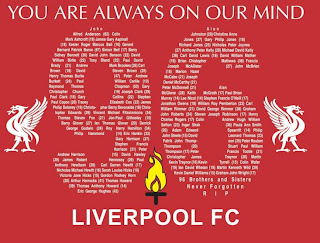 This has been a tough week for me.
I thought after 23 year I might be able to deal with the findings of the Hillsborough Independent Panel Report. I thought I had my feelings under control and could take it in my stride. I couldn’t.
As I watched it unfold, from Cameron’s speech in parliament, to the last moments of the vigil in Liverpool I have cried, beaten my fists in fury and felt the guilt of survival all over again. It never goes way, it only lies hidden.

The despicable behaviour of those charged with protecting us on that day has me enraged. The cover up, beyond even the belief I already had about the goings on, aghast. The dignity and strength shown by the people who made it happen, humble.

This is not just a momentous day for the families and friends of Hillsborough victims, and those of us injured but surviving, it’s also a day that transcends football, and sport. It is a result that should reverberate throughout every football ground, and through every supporter, regardless of their allegiance.

It could so easily have been you.

I was one of the lucky ones. The report showed that dozens of people could have been saved if they had been treated correctly at the scene. Mine was saved by the selfless quick actions, and disregard for the policeman who pronounced me dead on the pitch, of a few fellow fans, who pushed me over the fence, gave me mouth to mouth and carried me unconscious out of the ground on advertising hoardings. They got me into an ambulance and I was taken to hospital. I have never met any of them. I was in touch with one lad once, but he was too traumatised to meet me. They, and everyone else there that day, should be proud of their actions. They have suffered horrifically since through no fault of their own.

What happened that day, and in the intervening 23 years, is a lesson in the venal nature of some in positions of authority when protecting themselves, and their institutions when they spy a way out, an escape from being held accountable. The pursuit of the truth has been difficult. Ordinary, working class people, stricken with grief, looking for answers and justice for 23 years, while having doors continually slammed in their faces and told to move on, forget about it, stop whinging.

They are an inspiration; the perfect embodiment of dignity, tenaciousness and fighting spirit.

Those responsible for the lies, the deceit, the betrayal of trust and the hateful covering up of their own culpability must now be held properly to account.

Those in the South Yorkshire Police who failed to carry out their jobs correctly then deliberately changed witness statements, tried to find criminal links by referencing the dead with criminal records, and took blood alcohol readings from children to try to blame alcohol.

Those in the press who thought that their print-and-be-damned actions were in the public interest, but were nothing short of disgusting lies designed to scapegoat, smear and denigrate 96 innocent men, women and children.

The government of the time that saw an opportunity to wage their class war against the industrial workers of this country, outside the factories, mining towns and docks.

Sheffield Wednesday football club, for their unwillingness to ever accept their part in the disaster by owning and leasing out an unsafe, crumbling stadium unfit for purpose.

And the FA, those bastions of all things inept and wretched, for their lack of awareness, their willful disregard for stadium safety reports and their typically pathetic attempts to avoid any connection with the events of April 15th 1989.

I hope the families and friends of the victims feel they have won a victory, I hope they can find some peace, and I hope that the new inquests they want are forthcoming.

For those who were responsible, took no blame and spent 23 years lying, shifting blame and treating the dead and their relatives with utter contempt. I hope they are truly ashamed and disgusted with themselves. And I hope they experience some of the horror and guilt they’ve so willing to pile onto others for the past 23 years.