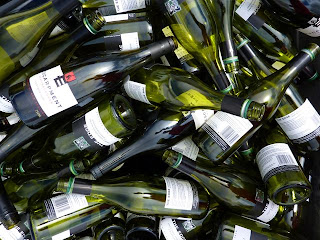 As human beings continue their never ending search for self destruction I thought a light-hearted missive might be in order.

I was reading something or other not long back (Wodehouse I think) when a drunken character was described as ‘in his cups’.
A delightful expression I thought and it got me thinking.

What other expressions for drunkenness are a credit to the English language?
In my time I’ve heard, or used, wankered, twatted, pissed, muntered, bladdered, battered, hammered, arseholed, plastered, caned and of course the ubiquitous fucked; the list goes on.

But what of those expressions that show the true diversity of this jewel of languages? That illustrate the endless possibilities of English to articulate one state of being in countless ways.

‘In his cups’ I particularly like, and is possibly of Roman or biblical origin.
‘Shedded’ is one I’ve heard and apparently is short for ‘my shed has collapsed and taken most of the fence with it’. Possibly not the easiest way to verbalise your drunkenness.

The Aussies have given us ‘paralytic’ since the early 20th century, and ‘shot full of holes’, which they lifted from the Kiwis in world War One, and good on them for it.

‘Smashed’ sounds like it’s a modern invention to me, but comes from an old American saying ‘smashed as a brandy peg’. Smash being a type of brandy apparently.
‘Pickled’ is wonderful, as is ‘piddled’. ‘Pie-eyed’, is a peculiarly American term that reached our shores in the late 1800’s.

It’s amazing how each word or expression brings to mind a very specific level of drunkenness. A man who was ‘tipsy’ or ‘squiffy’ or ‘sozzelled’ wouldn’t hit his wife would he? But someone who is ‘tanked up’ might.

They are also, like much slang, time capsules that appear and disappear in short time periods. ‘Swipey’ for example is recorded from 1844 but had pretty much died out by 1900, ‘rat-arsed’ is a wonderful newer invention, first heard from teenagers in the ‘80’s.

In the late 1700’s you might have ‘swallowed a hare’ or if in port ‘swallowed a sailor’. Something that might get you an odd look in Brighton in the 21st century.
The 1920’s had a string of lovely descriptions that really put you right there amongst the flappers; ‘ossified’ ‘spifflicated’, ‘canned’, ‘corked’, ‘scrooched’, ‘jazzed’, ‘zozzled’, ‘owled’, ‘embalmed’, ‘lit’, ‘potted’, or ‘fried to the hat’.
All of which applied presumably to that wonderful chronicler of the jazz age F. Scott Fitzgerald.

The amount are incredible, the diversity staggering, it’s a book topic not a blog entry so I’ll leave you to seek out you own and bask in the glow of our wonderful language.

And forgive me if this blog entry is a little disjointed, I was at a friend’s stag do last weekend and was ‘crapulent’ to the point of being as ‘stewed as a fresh boiled owl’.